Marilyn Mosby’s initial appearance and arraignment in federal court today was a 12-minute process to settle largely procedural matters and give the defendant, Baltimore’s top prosecutor, an opportunity to formally hear the charges and enter her plea.

“Your honor, I will plead not guilty to all four counts,” Mosby said, appearing by video before U.S. Magistrate Judge J. Mark Coulson.

Brief as it was, the court appearance provided an opportunity for her attorney, A. Scott Bolden, to again denounce the four-count indictment against his client as the work of biased prosecutors and political enemies.

The moment came when Coulson asked if there were any discovery issues. Bolden, who is calling for the trial to be held within 60 days, said he would invoke a rule calling for discovery materials to be produced immediately.

“This is a politically charged case,” Bolden said. “My client is in the middle of a re-election campaign. The government has decided to bring an indictment against her four or five months out.”

Asked to respond, Assistant U.S. Attorney Leo J. Wise pointed out that there is a procedure to make such a request.

“The defense has not made a formal demand for discovery as required by the court’s standing order on criminal discovery,” Wise said. “We will obviously respond once they do.”

In an emailed fundraising pitch last night, Mosby made the same case, decrying a “weak indictment” that she blamed on “powerful entrenched keepers of the status quo.”

“WE’RE BUILT FOR THIS!” Mosby says in the email, vowing to “not be distracted by the attacks of my opponents or the federal investigation that I am facing.”

Mosby was indicted on January 13 on two counts of perjury and two counts of making false statements on loan applications to buy two properties in Florida.

Prosecutors allege she lied about having experienced financial hardship in order to make early withdrawals on her retirement savings in order to get the funds to make down payments on the properties.

And they say she failed to disclose the $40,000 lien on her house in Baltimore in applications for mortgages on the properties. They say she also falsely claimed that she would use one of the properties as a second home in order to get a more favorable rate.

Host Joy Reid, who had Mosby on her MSNBC show on Tuesday, made cursory mention of the charges, but mostly allowed Mosby to denounce the indictment and declare her innocence. (Mosby has refused to be interviewed by the local media.)

That leads to a page where contributors can give $25 – $6,000 (or an amount of their choosing) to “Friends of Marilyn Mosby.” 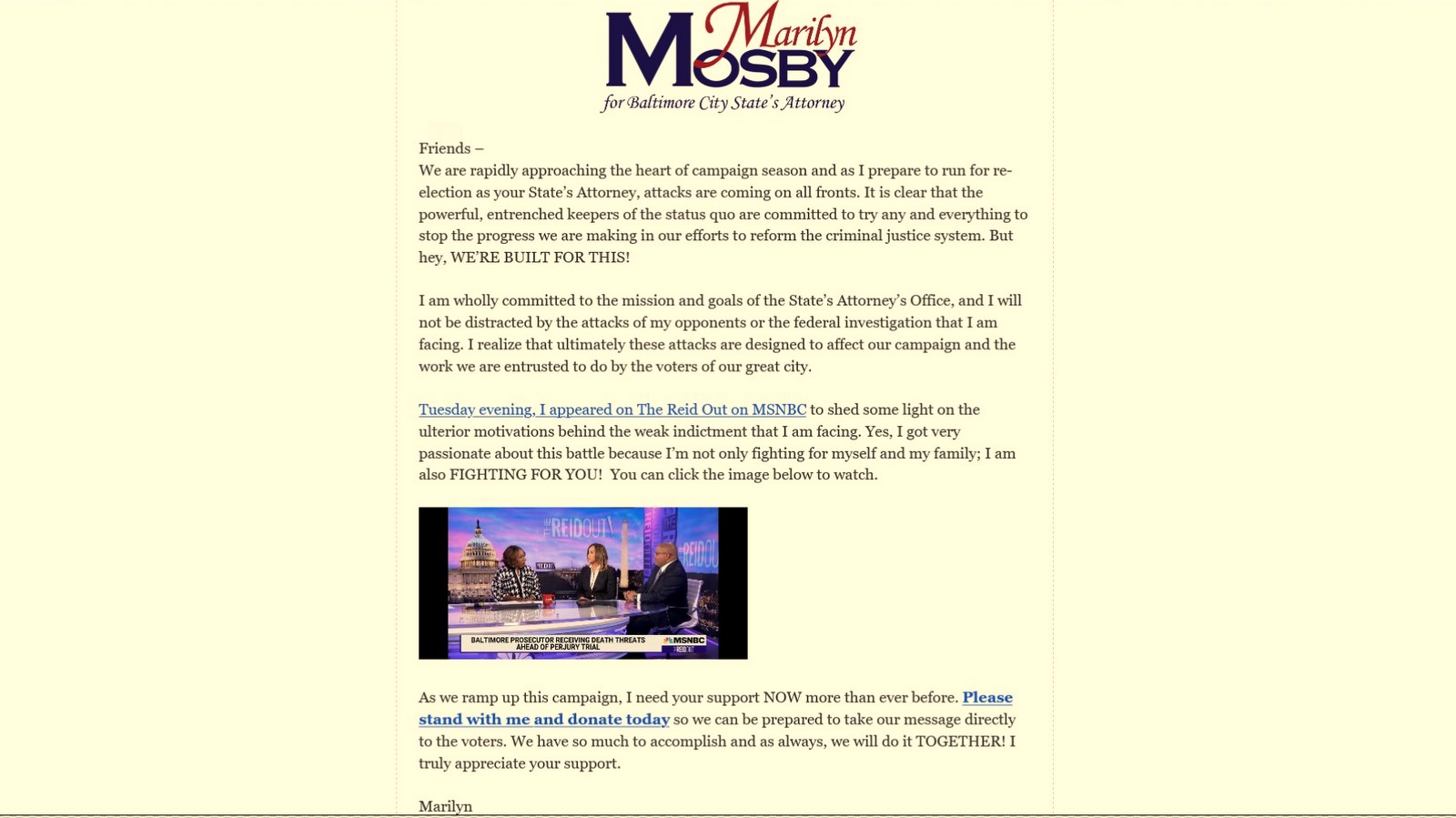 Baltimore’s incumbent state’s attorney is building up a war chest as she seeks a third term in office.

Contributors include Kimberly Morton, former chief of staff to former mayors Catherine Pugh and Bernard C. “Jack” Young, and J.P. Grant, the Columbia-based financier who admitted illegally paying $100,000 to former Mayor Catherine Pugh shortly before she was sworn into office.

The report also shows Mosby used nearly $50,000 in campaign funds to pay Bolden and others lawyers defending her in the criminal probe.

“Friends of Marilyn Mosby” is separate from the legal defense fund set up last spring by Mosby and her husband, City Council President Nick Mosby, whose business and campaign records were also subpoenaed by the federal grand jury last year.

“The Mosby 2021 Defense Fund” offers various payment plans online, but the names of its administrators and the amount of funds collected and disbursed have not been publicly disclosed.

Today’s arraignment offered some new information for those following the case.

Wise estimated the length of the trial as four days.

And Coulson relayed some information for opposing counsel from District Judge Lydia Griggsby, who is overseeing the case.

A February 18 deadline is set for motions in the case, and a conference call is scheduled for at 11 a.m. on February 23.

Bolden said he plans to file a number of pre-trial motions “if not today, by early next week.

“While many of our neighbors have suffered to make ends meet during this ongoing pandemic, others stole taxpayer money meant to put food on the kitchen table,” Barron says in the release.

The statement doesn’t mention Mosby specifically, but alludes to the charges against her.

Since the start of 2021, the Maryland U.S. Attorney’s Office has charged 23 defendants with criminal offenses based on fraud schemes connected to the Covid-19 pandemic.

The cases involve attempts to defraud over $14 million, the statement says, noting more than $419,000 has been seized.

As part of the initiative, the Maryland U.S. Attorney’s Office has signed MOUs (memorandums of understanding) with Brian D. Miller, Special Inspector General for Pandemic Recovery, and James D. Powell, Deputy Inspector General at the U.S. Department of Labor.

“These partnerships allow us to beef up our efforts to prosecute those who steal from the American taxpayers,” Barron said.