He was buried seven years ago, but the grandfather of Baltimore State’s Attorney Marilyn Mosby apparently lives on as a source of campaign cash for her and her husband, City Council President Nick Mosby.

Prescott Thompson, who died on February 22, 2015 at age 82, is listed as contributing $500 to Marilyn Mosby last year, according to her most recent finance report to the State Board of Elections.

As chairman of the Friends committee, Marilyn Mosby vouched, under the penalty of perjury, for the report’s accuracy “to the best of my knowledge, information and belief.”

The report was filed on January 19, 2022, or six days after she was indicted on federal charges linked to her purchase of two Florida vacation homes.

Mosby has pleaded not guilty to the charges.

She did not respond to questions by The Brew about the Prescott Thompson contribution. 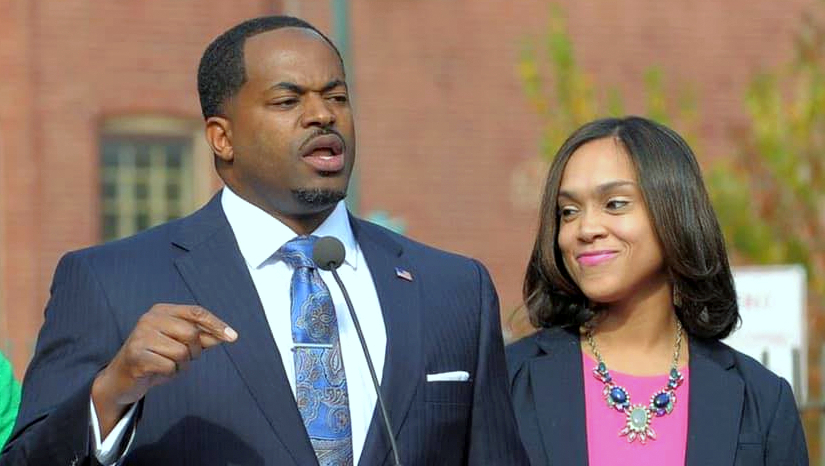 Nick and Marilyn Mosby from The People for Mosby Facebook page.

Not the Only Check

The Mosby finance report lists the deceased Thompson as living at the same Dorchester, Massachusetts, house where he and his surviving widow, Marilyn Thompson, raised Baltimore’s future chief prosecutor.

Thompson is listed as “retired” in Mosby’s campaign report. A onetime patrolman at the Boston Police Department, he retired early from the force after he lost an eye in a work-related accident.

This isn’t the only check tied to the dead man, The Brew has found.

On July 18, 2017, or two years after Thompson’s funeral, Nick Mosby’s campaign committee reported receiving a $500 check from a “Thompson Prescott.”

A few months earlier, Mosby had been appointed a state delegate for the 40th District after Gary Brown Jr., the presumptive candidate, was indicted for using family members to falsify campaign contributions for incoming Mayor Catherine Pugh.

As chairman of his own finance committee, Nick Mosby vouched for the accuracy of the report he submitted to the State Board of Elections.

Marilyn Mosby’s grandparents became a source of financial succor to the power couple after Nick Mosby gained “power of attorney” (POA) over the elderly couple nearly two decades ago,

On November 26, 2004, according to Maryland land records, the Thompsons signed an agreement to appoint Nick, who at the time was engaged to their granddaughter, as their agent and attorney.

This was done despite the fact that Marilyn Mosby was then a third-year law student and Nick Mosby had no legal training.

The limited purpose of Nick’s POA was to use the Thompsons’ assets to “finance and obtain title to” a rowhouse in Reservoir Hill owned by Baltimore City.

Nick and Marilyn purchased and moved into the house, while the Thompsons, back in Massachusetts, were named as co-owners in the deed along with Nick. 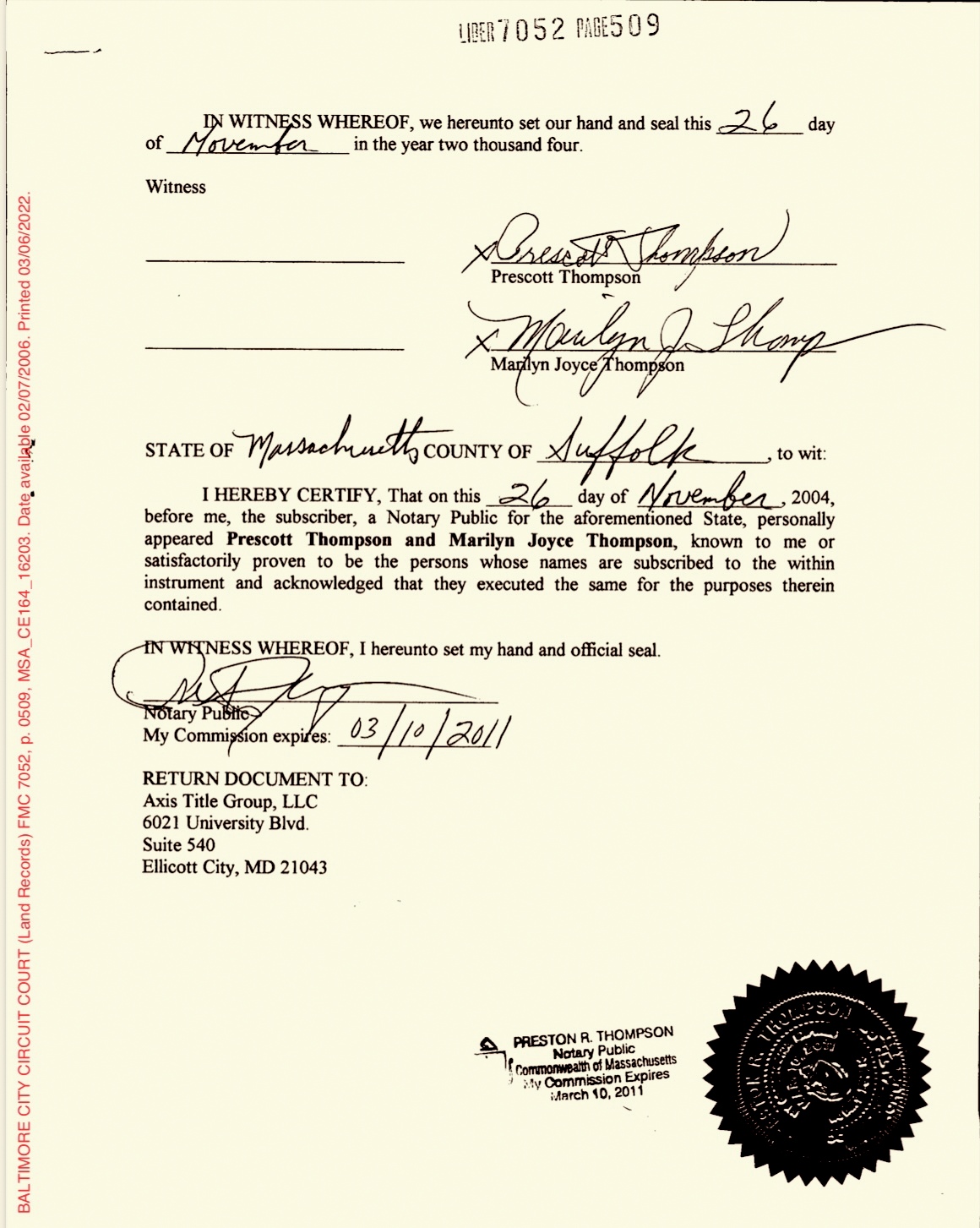 Who Signed the Checks?

To this day, the property is titled to Nick Mosby and the Thompsons. Marilyn Mosby’s name does not appear on the deed or any mortgages.

When Nick first, and then Marilyn, decided to run for public office, the Thompsons became relatively generous contributors.

Since her husband’s death, Marilyn Thompson can be found on the Mosbys’ finance reports.

Did Nick Mosby sign these checks as POA, which are recorded in campaign records as coming directly from Marilyn and the deceased Prescott Thompson?

He did not respond to a Brew request for comment.

The question arises because Nick Mosby recently secured a little-known $58,000 loan from The Harbor Bank of Maryland, using as collateral the Thompsons’ share of the Reservoir Hill house

As noted on the deed of trust reproduced below, Mosby signed the agreement as POA for both Marilyn Thompson and the Estate of Prescott Thompson 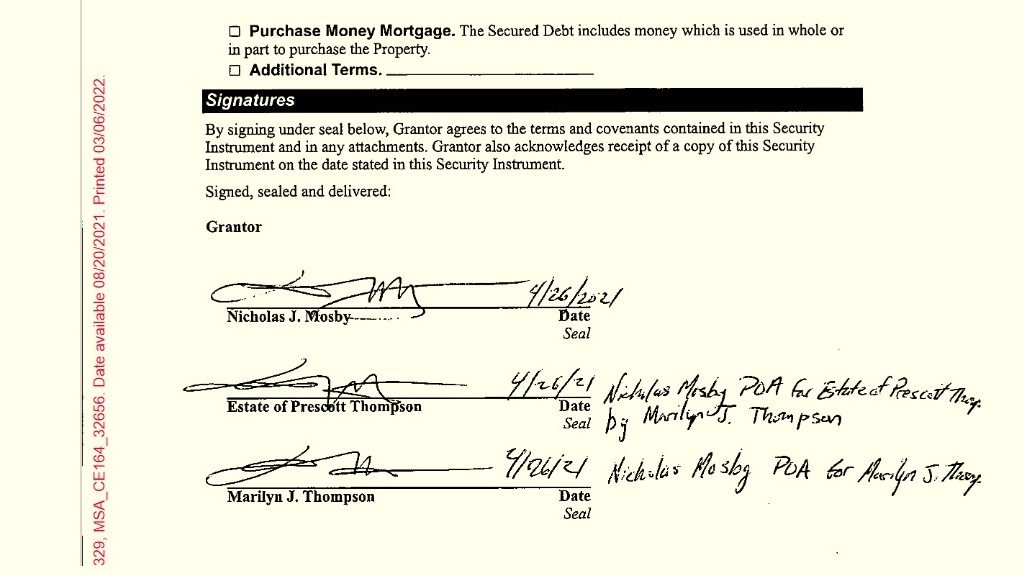 Signature page for the deed of trust for the $58,000 Harbor Bank loan made last April to Nick and Marilyn Mosby. (Mdlandrec.net)

State law does not allow Mosby to act as POA on behalf of the Estate of Prescott Thompson.

Article 17-112(a) of Maryland Estate and Trusts says that “a power of attorney terminates when the principal dies.”

It’s legally long established that when a person dies, the assets go into an estate where a “personal representative” (PR) acts to dispose of the assets.

But Nick Mosby did not sign the deed of trust as the PR of the Estate of Prescott Thompson.

Nevertheless, Harbor Bank permitted the loan to be processed, with the bank’s own loan portfolio manager, Brenda Jeter, acting as the notary.

Maryland law also requires persons acting as POA – as Nick did in signing the deed of trust on behalf of Marilyn Thompson – “to act with care, competence and diligence for the best interest of the principal.”

Specifically, according to the Article 17-113, a person holding the power of attorney must “act so as not to create a conflict of interest that impairs the agent’s ability to act impartially in the principal’s best interest.”

However, none of the proceeds from the Harbor Bank loan was  distributed to the widow Thompson or to her husband’s estate.

Instead, the $58,000 loan went directly to Nick and Marilyn Mosby, even though Marilyn Mosby is nowhere to be found on the property deed.

Haskins was an early and prominent supporter of Marilyn Mosby and has regularly contributed to Nick Mosby.

In recent years, he and CEO Lewis have donated $3,600 to the couple, according to online Elections Board records.

The Harbor Bank loan was signed last April 26, or a month after the Maryland U.S. Attorney’s Office issued subpoenas to the Mosbys, informing them that they were under a criminal grand jury investigation.

Indicted on perjury and false statement charges, Marilyn Mosby’s trial is set to begin on May 2.