Baltimore State’s Attorney Marilyn Mosby has amended her annual finance report to indicate that her 84-year-old grandmother – and not her deceased grandfather – contributed to her campaign.

The corrected report, submitted to the State Board of Elections, wipes from the public record a $500 check that was listed as coming from Prescott Thompson, who died in 2015, on November 30, 2021

Another $500 check from the dead man, going to the campaign committee of her husband, City Council President Nick Mosby, has not yet been corrected, a review of his finance committee reports shows.

•  Giving from the grave? Marilyn Mosby’s dead grandfather contributed to her and her husband’s campaigns (2/23/22)

Meanwhile, the Elections Board has accepted the couple’s explanation for diverting over $100,000 in campaign funds to pay for legal fees.

Jared DeMarinis, director of the board’s candidacy and campaign finance division, found that the legal payments did not violate state election law.

DeMarinis said Maryland law prohibits any candidate or political committee from using campaign funds for legal expenses related to investigations or court proceedings unless there is “a direct nexus between the expenditure and the candidacy.”

That test was met, according to DeMarinis, who said in letters to the couple in February that he reviewed the matter after “recent press coverage.”

Marilyn Mosby is facing a trial in May on federal perjury and false statement charges related to her purchase of two Florida vacation homes.

After The Brew disclosed the “ghost” contributions by Prescott Thompson, the Mosbys issued a statement calling the matter a “simple administrative oversight.”

They said a check signed by Marilyn Thompson was mistakenly attributed to Prescott Thompson, whose name still appears on her checking account.

The couple has not responded to several requests by The Brew for a copy of the checks.

Last April, the Mosbys obtained a $58,000 loan from The Harbor Bank of Maryland.

The loan was secured by Nick Mosby signing as POA (power of attorney) for both Marilyn Thompson and the Estate of Prescott Thompson.

Maryland law says that the power of attorney ceases when a principal dies. The assets of the deceased revert to an estate administered by a personal representative (PR), who distributes the assets to the surviving spouse and others.

The Mosbys have not answered questions about why the Thompsons’ assets were used to secure a loan going only to them.

As for the Mosbys’ practice of paying lawyers with campaign monies, DeMarinis said he reviewed their campaign filings and identified $47,729.60 in legal fees paid by Friends of Marilyn Mosby and $52,500 charged to Friends of Nick Mosby.

His finding confirms Brew reporting  – here,  here,  here and here – on the couple’s use of political funds to pay legal fees amid multiple investigations.

The Baltimore Office of the Inspector General investigated Marilyn Mosby’s travel and private companies in 2020.

And Marilyn Mosby’s four-count federal indictment in January came after a year-long probe into her personal finances, Florida real estate purchases and other matters.

Nick Mosby, who has not been criminally charged, was subpoenaed by federal prosecutors, indicating he was also a subject of the investigation. 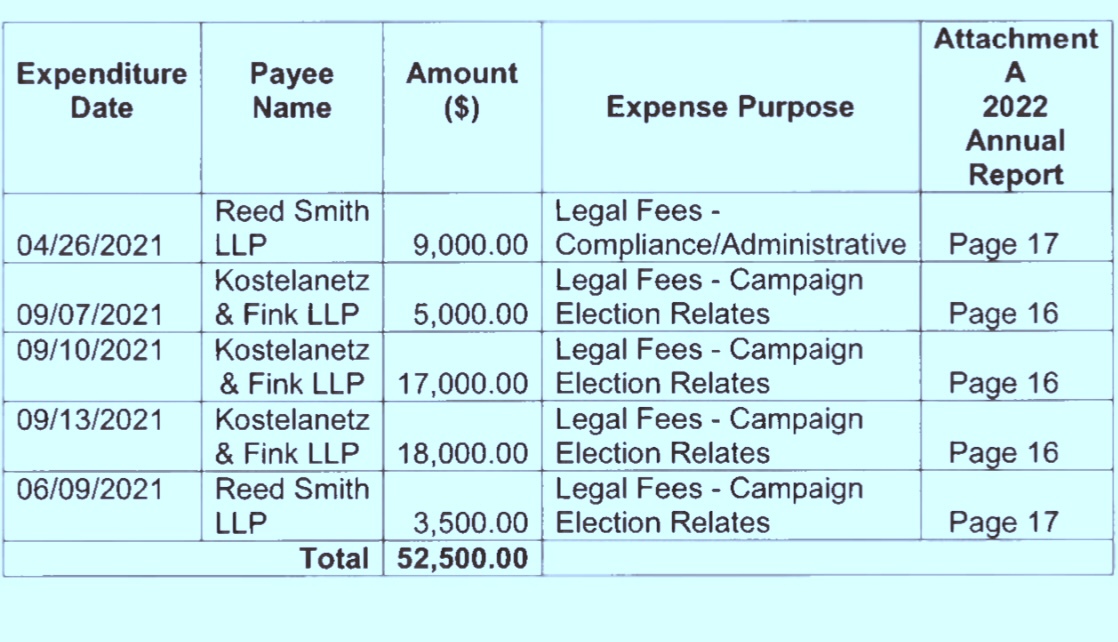 Representing Nick and Marilyn Mosby, attorney James J. Temple Jr. wrote to DeMarinis on March 18, making his case for the “direct nexus between the expenditure and the candidacy.”

Temple noted the federal investigation into the couple was widely known to the public.

“Additionally,” he said, “what is unreported or at least under-reported is that the unrelenting and expanse [sic] investigation inserted itself into almost every aspect of their lives – including their respective campaign committees.”

“The investigation morphed into the targeting of not only the candidates, but the individual committees and their respective treasurers,” he continued. “The finance  committees were therefore under obligation to provide services of counsel.”

Temple noted that he was “constrained” by attorney-client privilege from providing documentation of attorney services. That said, he included letters from the couple’s attorneys, including A. Scott Bolden, of the Reed Smith firm, Marilyn Mosby’s lawyer.

Nick allotted $12,50o in campaign funds to pay Reed Smith, whereas Marilyn diverted $37,500 from her campaign to Reed Smith for the same number of reported hours, the couple’s individual finance reports show.

Prepping for the Feds

Attorney Caroline D. Ciraolo, of Kostelanetz & Fink, did not disclose hours worked on behalf of Friends of Nick Mosby, but described the services she rendered after Mosby and his campaign treasurer, Carlton Saunders, were subpoenaed in March 2021.

The questions posed by the federal agents at a subsequent interview, Ciraolo said, focused on “campaign and campaign finance issues, tax reporting and business dealings.”

He said he assisted with the production of campaign finance records and preparing Small ahead of his interview with federal agents.

“Mr. Small was also the tax preparer for the Mosbys,” Templeton wrote, “so he was able to produce many of the other documents requested in the subpoena.”

– Fern Shen contributed to this story