After spending two months among the sludge-clogged, vegetation-choked precincts of Baltimore’s Back River Waste Water Treatment Plant, the experts sent in by the state have submitted a report with a stinging analysis – and not just about broken equipment and failing sewage treatment systems.

“There appears to have been a high loss of institutional knowledge,” leading to “a lack of management control,”  Maryland Environmental Services (MES) concluded, citing staff shortages, high turnover and little ability to attract mid-level managers.

The MES team observed not just “open unwillingness to cooperate,” but also “animosity. . . between the maintenance and operation groups.”

“Negative behaviors – ranging from sleeping on the job to verbal/physical altercations between employees – have been observed on both the supervisory and subordinate level,” the report released on Thursday said.

City staff were seen “washing personal vehicles during the workday and have admitted to receiving payment or free lunch for services provided,” according to the report by the quasi-public agency, assigned by the Maryland Department of the Environment (MDE) in March to temporarily manage the polluting treatment plant.

The problems at Back River have been known to environmental groups and MDE itself for years.

The new report provides gritty details and more context to operational failures that have paralleled vast public expenditures lavished on the facility, including a new $430 million headworks designed to handle emergency wastewater surges during storms.

More than $1 billion in taxpayer funds have gone into upgrades to Back River and the city’s other plant, the Patapsco Wastewater Treatment Plant at Curtis Bay, to bring them up to federal nutrient removal standards.

• After reports of dead fish and “volcanoes of black stuff” in Back River, MDE cracks down on sewage treatment plant (3/25/22)

Poor management and bad attitudes start at the top, the report says, highlighting the defensiveness and lack of urgency on the part of Baltimore Public Works Director Jason W. Mitchell and his team.

“The gravity of the issue does not seem to resonate with DPW staff, as their response to the MDE order seems to have been a ‘business as usual’ approach.” 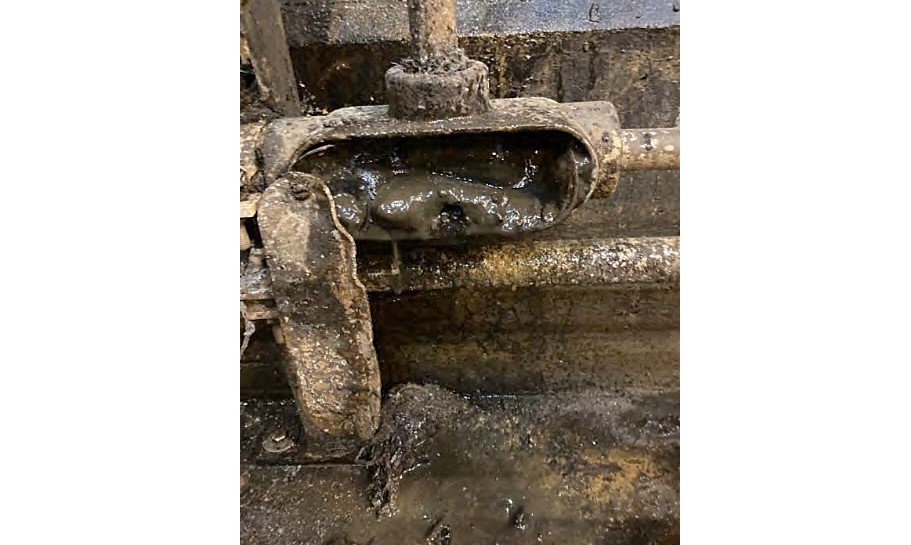 Closeup of the oozing sludge that has immobilized a Pump House Actuator that should be producing mechanical power.

For their part, DPW officials have reached an agreement with MDE to drop the city’s legal challenge to state intervention at Back River and will reimburse the state for its emergency corrective efforts there.

On Friday, a consent order was released laying out the terms for MES’ continued supervision of the plant where massive releases of poorly treated sewage drew public attention a year ago.

Both the Back River and Patapsco treatment facilities have been exceeding their permits, polluting local waterways and Chesapeake Bay with illegal amounts of phosphorus and nitrogen.

“The report underscores just how catastrophic of a failure we are dealing with on multiple levels”  – Angela Haren, Chesapeake Legal Alliance.

Also moving forward are legal actions by the state and by Blue Water Baltimore over the city’s sewage treatment failures.

The local nonprofit plans this week to file an injunction against the city in federal court to require immediate action to address solid waste handling and staffing and other problems.

“This report supports a lot of what we already knew about how dire conditions are at the Back River WWTP. It underscores just how catastrophic of a failure we are dealing with on multiple levels,” said Angela Haren, senior attorney at Chesapeake Legal Alliance, which is assisting Blue Water.

Upon arrival, MES began to clean tall grass and weeds out of tanks, make critical repairs to broken machinery and get the staff to clean up unsightly and dangerous conditions around Back River’s 466-acre site.

Their report analyzes the interconnected breakdowns in the handling of solids at Back River that led to illegal releases of pollutants into Back River.

For example, DPW-operated centrifuges typically process some of the material, sending the solids to Veolia’s composting facility on Quarantine Road, but MES found that only two of the centrifuges were operating.

The increasing level of solids in the system began affecting another process – the drying and pelletizing facility located onsite and operated under contract by Synagro, Inc.

That process uses non-potable water from the plant for fire suppression, which began clogging equipment to the point where Synagro could no longer safely operate it, the report said.

Identifying these and many other issues, MES made extensive recommendations for replacing and repairing broken equipment, instituting proper maintenance, improving safety and hiring key staff, including a biosolids manager and two staffers. 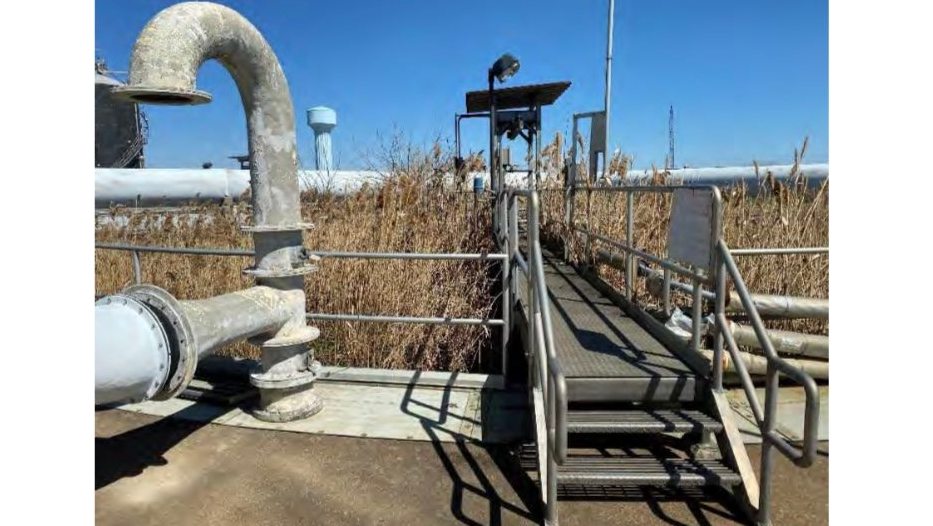 Vegetation growing in a gravity sludge tank at Back River plant. (MES May 2022 report)

The MES report makes a number of observations about staffing deficiencies at Back River.

With 50 vacancies, the plant’s operations staff was found to be running at half the required staffing level. The MES team found 44 vacancies in other departments and noted that, because of the excessive turnover, most managers had only been in their positions for a few years. “Apprentices at times were being trained by other apprentices – a recipe for failure.”

The report describes not just understaffing, but widespread failure to follow procedures and an operational malaise at all levels.

“Facility staff sometimes question the need for this work, and this attitude affects the morale of the more dedicated operators”  – MES report.

“Most of the facility’s valves, pumps, blowers, mixers and controls are not functional. Pumps are plugged with trash, drains are clogged, and floors are covered with water or sludge,” the report said.

“MES has initiated housekeeping tasks such as picking up trash outside, removing unused gear from walkways and throwing away unserviceable or out of date supplies/equipment because these simple tasks were not being performed by maintenance staff,” the authors continue.

“But facility staff sometimes question the need for this work, and this attitude affects the morale of the more dedicated operators.”

Discussing the their challenges dealing with poorly performing staff, managers complained “about the disciplinary process taking too long, employees filing grievances that
result in no action being taken, and employees subsequently being reassigned, which further exasperates [sic] the staffing issues.”

The report also describes a lack of urgency from DPW leadership, observing that “the tone was set at the first weekly meeting on April 1” where the need to bring potable water to the plant for the pelletizer was raised.

“As this discussion intensified, the DPW Director [Mitchell] defended the city’s position on moving forward with the water lines saying, ‘It has only been seven days’ since the order to do so was issued,” the report said.

“The MDE representative at the meeting reminded DPW that it had actually been seven months of non-compliance.”

“We need willing partners to embrace a cultural and structural change”  – MES report.

MES also expressed frustration over the problem of procuring needed equipment and services – and the attitude of DPW’s Bureau of Water and Wastewater to this challenge.

“After seven weeks they are still looking at ways to streamline this process,” the report noted. “In our judgment, this indicates there may be a lack of understanding regarding the urgency of the issues.”

DPW’s responsiveness to the MDE directive has been limited, MES authors complain: “The fact that the same ideas and issues keep being rehashed – week after week – in the weekly meetings speaks volumes.”

Getting Back River into compliance with federal clean water laws will require “a focus from city leadership,” the MES report concludes.

“We need willing partners to embrace a cultural and structural change with a renewed commitment to this critical environmental mission.”