Megan Johnson didn’t think much of it when she noticed bits of red stuff in the grass outside her Woodberry home. She thought it might be something from her roof.

Then on Friday she noticed more of the same material at the nearby playground where she’d gone to join a friend and her child – bright flakes of paint, some as big as the palm of her hand, on the playground surface.

The friend recalled that she, too, had seen the paint flakes outside her house.

At that point it hit them: the paint must be coming from the work that crews had been doing for the past several weeks on the huge television tower that gives their neighborhood its nickname “TV Hill.”

“My heart stopped for so long I was speechless,” Johnson said. “I wondered, what if this was lead paint?”

She and other neighbors in the North Baltimore neighborhood, who have also spotted the red paint on their cars and lawns, have been sounding the alarm on social media. Some neighbors said the crews appeared to be power washing. Others said it seemed they were grinding off the paint.

Concerned that the substance could be in the air, soil and other surfaces, Johnson went to the drugstore  yesterday and got an over-the-counter home test kit.

The chip tested positive for lead. 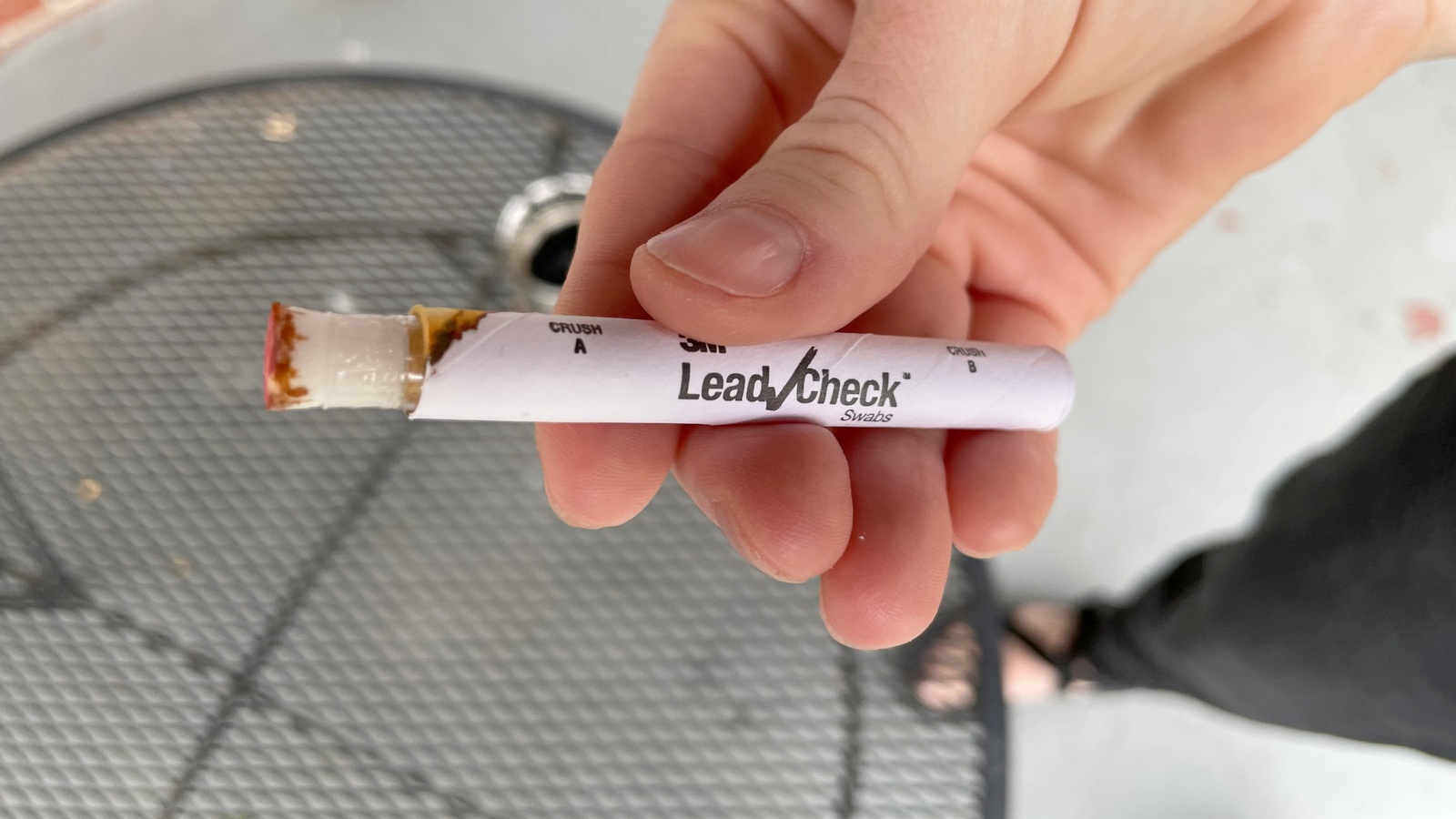 Positive lead test that Megan Johnson did on a paint flake found near her Woodberry home. (Fern Shen) 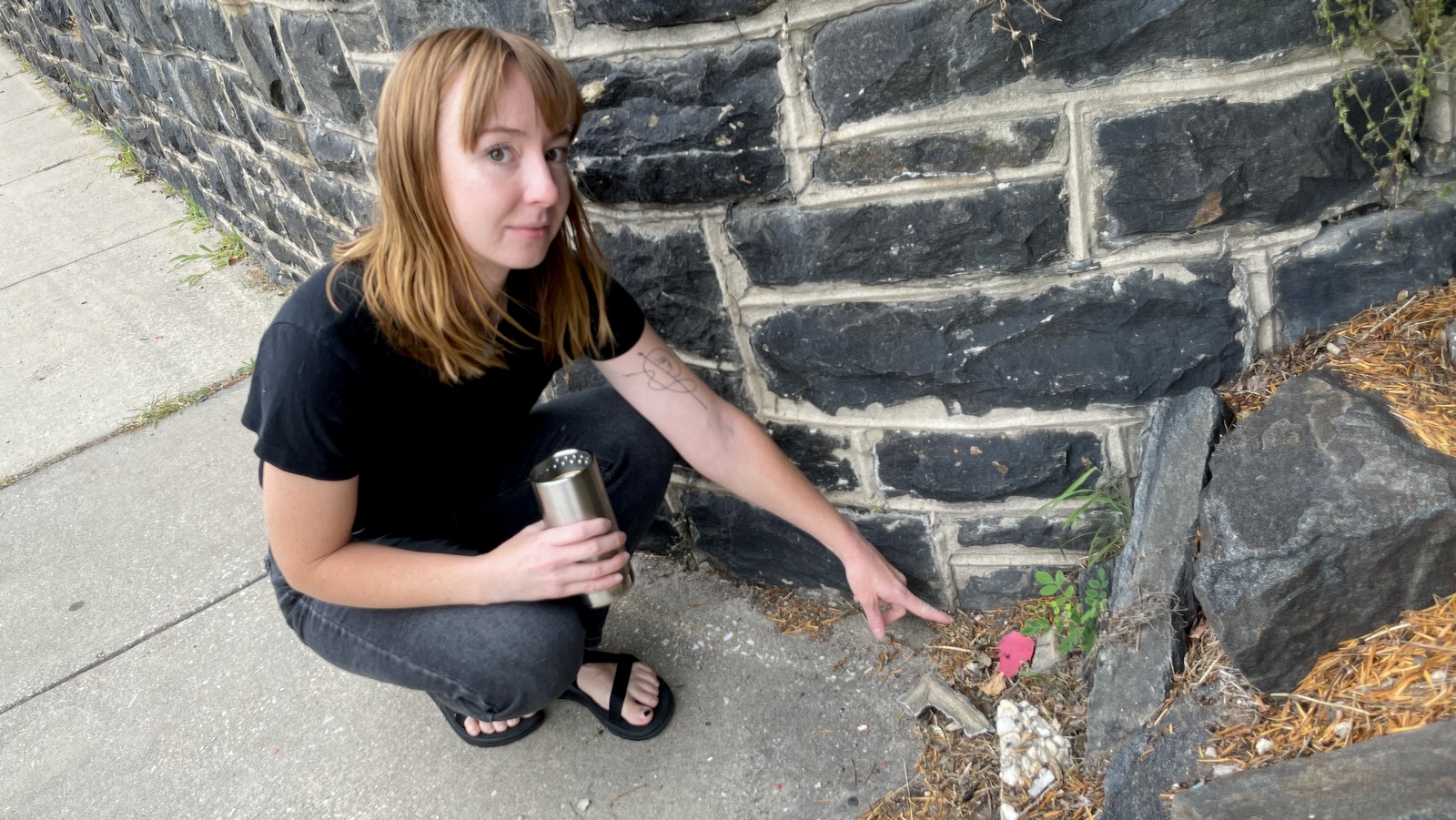 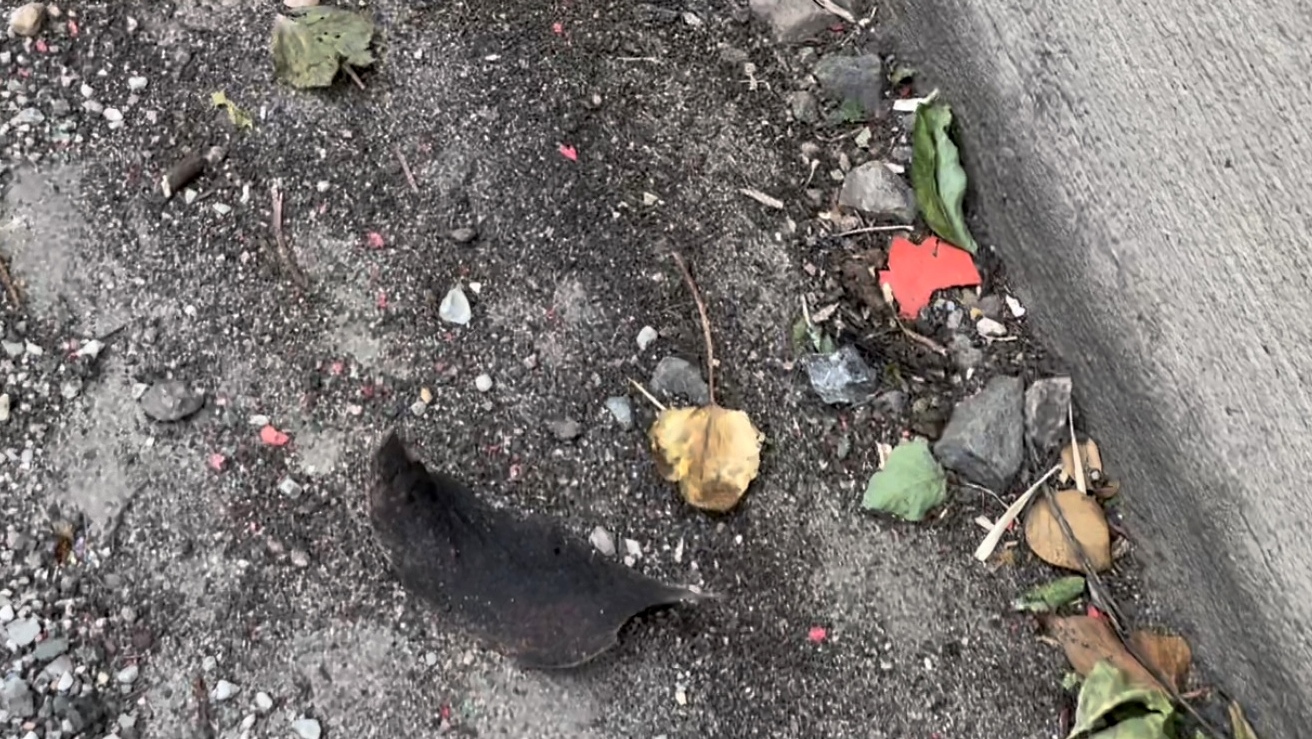 Red paint flakes along Clipper Road next to the curb. (Fern Shen) 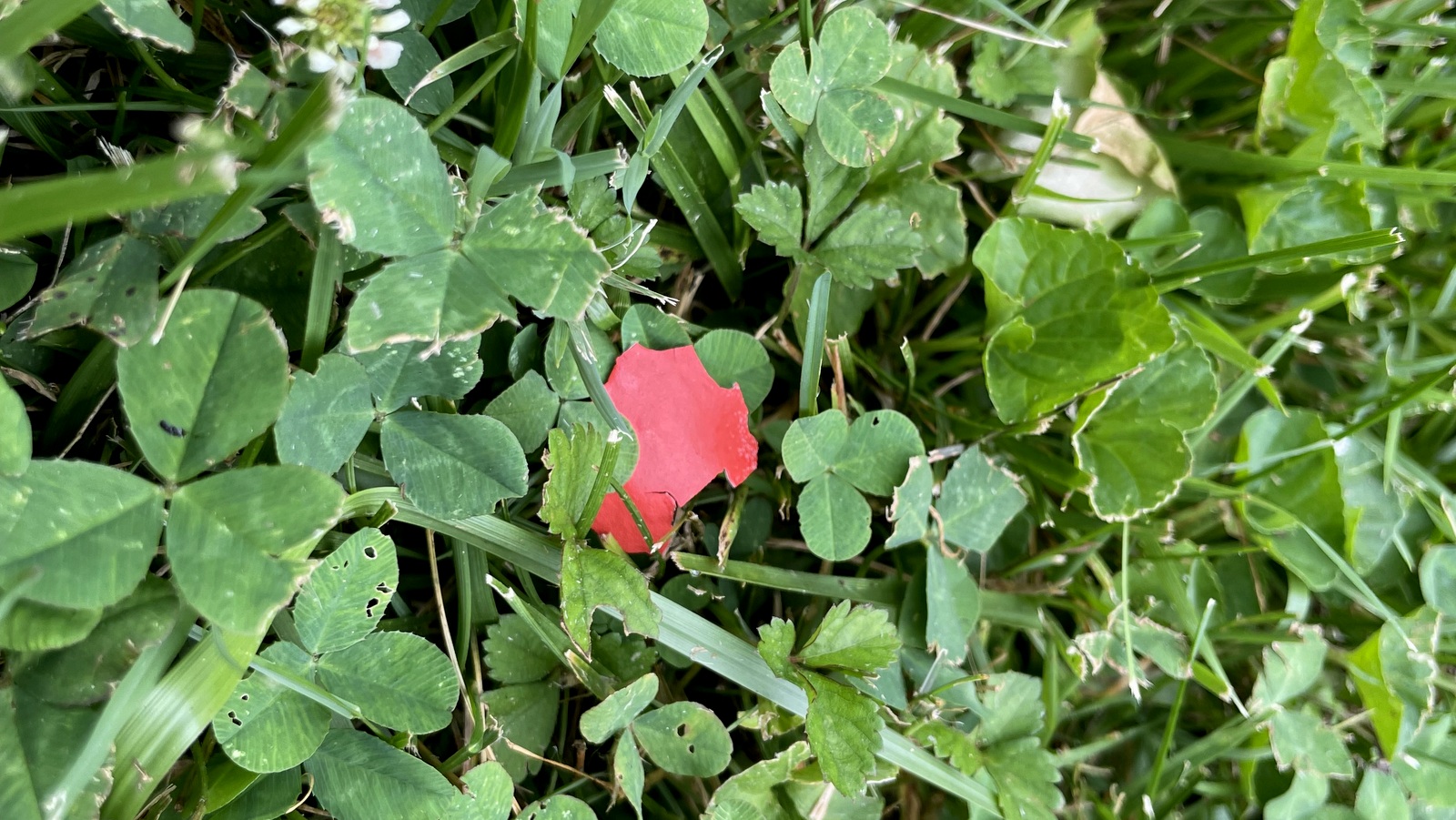 Paint chip in the grass at the children’s playground on Rockrose Avenue. (Fern Shen)

“Since then, I called everyone I could think of. Somebody needs to do a proper test, and if this is lead, put up signs so that people and children don’t touch it,” Johnson said.

“Why wasn’t the neighborhood told about this beforehand?”

One of her neighbors is so concerned that she’s getting her child tested for lead paint, Johnson said.

The distinctive tower – completed in 1958 and standing over 1,000 feet tall –  is owned by Television Tower Inc., a joint venture comprised of WJZ‐TV, WBAL‐TV and WMAR‐TV.

The Brew has reached out to officials at all three stations and has not yet received a reply.

So far, Johnson has reported the matter to the city’s 311 call center, the  State Department of Natural Resources, the Mayor’s office and her Council representative’s office.

Today she got a call back from someone from the Housing Department’s code enforcement division responding to her 311 report.

“He told me he couldn’t look at the tower because it was private property. And he said he had looked around and couldn’t see anything,” a frustrated Johnson said, grumbling “How does he not see it?”

The Maryland Department of the Environment (MDE) has not yet responded to The Brew, but a Woodberry resident today received this from the agency: 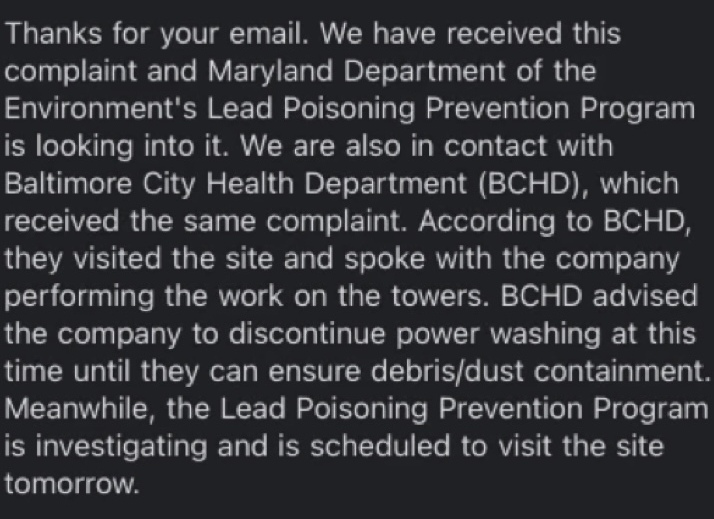 Email today from Kaley Laleker, director of Land and Materials Administration at MDE, to a Woodberry resident.

UPDATE: We received this response from MDE after publication: “We became aware of this situation today in an email from Baltimore City Health Department. MDE’s lead poisoning prevention team and hazardous waste program are investigating and are scheduled to inspect the site tomorrow (Wednesday).”

The City Health Department received a complaint about the paint flakes last evening and “issued a stop work order telling them to stop the power washing until they can guarantee a way to contain the paint,” spokesman Arinze Ifekauche said.

“Apparently, though, they are almost done” with the power washing, he said.

Today, Johnson took a reporter on a tour of the neighborhood, starting with the front yard of her home in the 2000 block of Druid Park Drive.

Paint chips could easily be found on the grass and front walk.

From there along Clipper Road, the tour proceeded to the playground at Hooper and Rockrose Park where there is also a community garden.

Paint chips along the route were everywhere: At the base of a church, in the middle of the roadway, in the gutter next to the curb.

The man, who had red paint flecks in his beard, declined to give his name or the name of the company he worked for.

Last night, Johnson said, she was told that neighbors saw people in the playground using vacuum to sweep up the chips, in some cases picking up clumps of them with their hands.

She said they refused to identify themselves.

Today, just below the WBAL-TV building on Hooper Avenue, the clean-up crew was back.

The Brew observed a group of four men with trash bags and other equipment picking up the bits of paint. “I’m just trying to clean up,” a man using an industrial vacuum said.

The man, who had red paint flecks in his beard, was asked if he was working for the TV station. He said “no,” but declined to give his name or the name of the company he worked for. 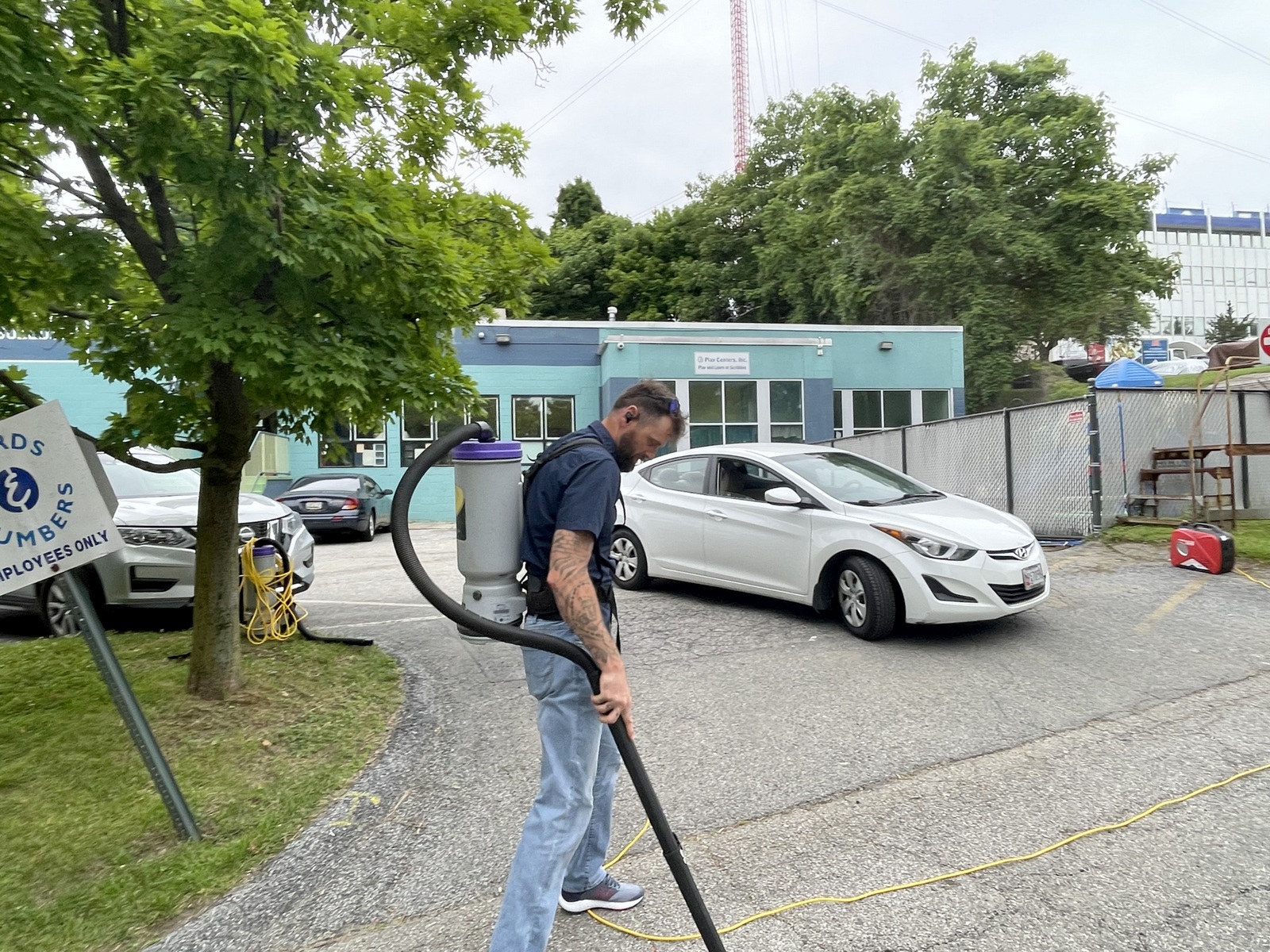 Tim Tunison, news director at WBAL-TV, said the staff knew about the issue, but declined to further discuss it, referring a reporter to general manager Dan Joerres.

On Hooper Avenue at the intersection with Rockrose, Tracey Brown was outside her house, using sticky tape to pick up the pieces of red paint.

“I figure that way I don’t have to touch them,” she explained.

Brown, who has lived there since 1996, said the neighborhood is used to the drawbacks of living cheek-by-jowl with the giant television tower. Sometimes icicles fall off it. Two years ago, she said, they had to evacuate because of possible danger from repair work on the tower.

“I’m thinking because these things are not in the houses, maybe it’s not a problem,” she said. “But I really don’t know.” 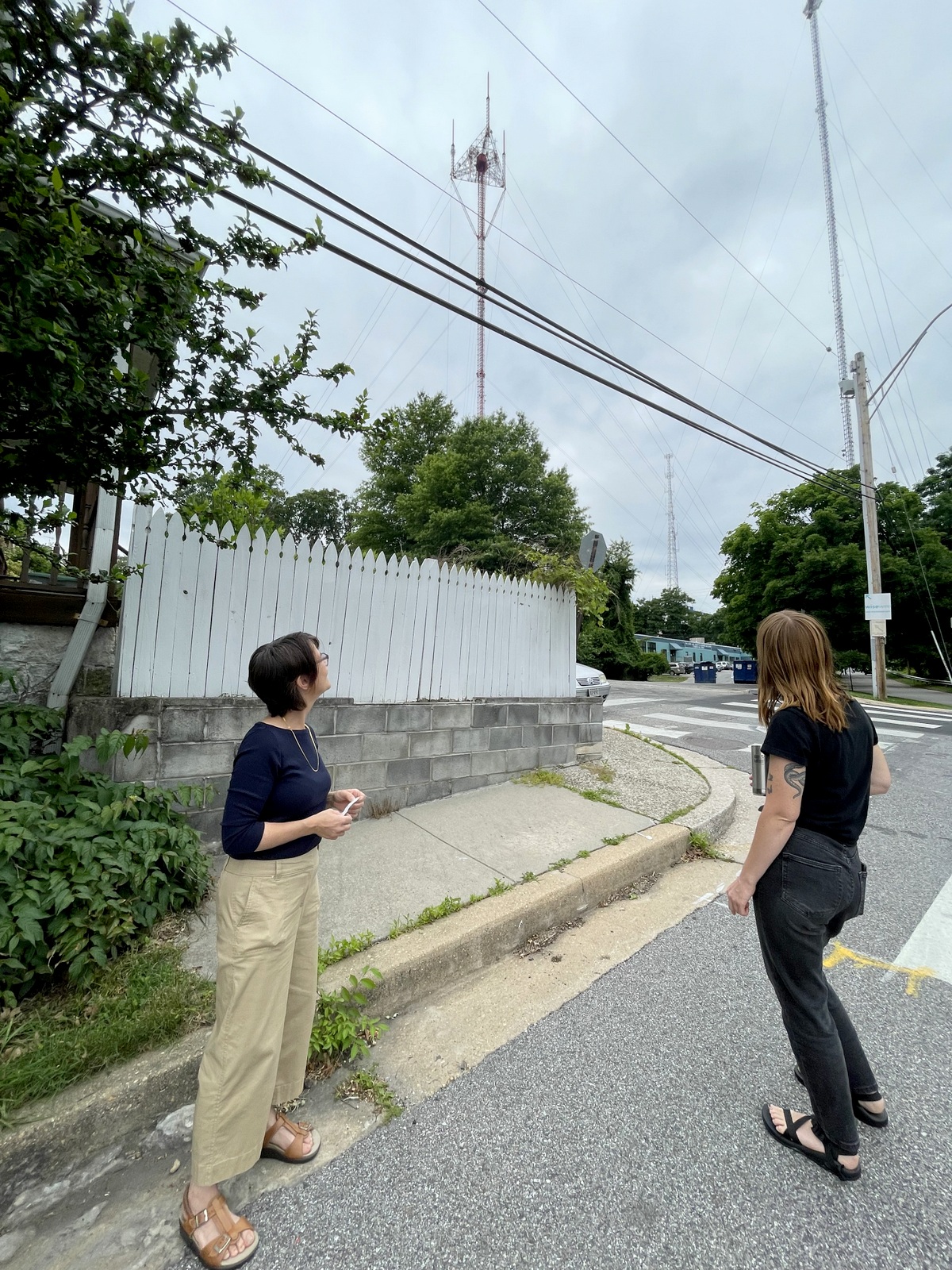 Tracey Brown and Megan Johnson, at Rockrose and Hooper avenues, look over at the TV tower. (Fern Shen)

Alice Volpitta, of Blue Water Baltimore, said she has received numerous pollution reports from community members concerned about the paint.

Volpitta, the Baltimore Harbor Waterkeeper, alerted MDE because she is concerned about possible contamination of the nearby Jones Falls waterway.

“It’s been badly abused in the past year,” she said. “First, it was asbestos and construction debris falling into the stream from the demolition of the old Schenuit rubber factory on the south side of the 41st Street bridge. Then it was illegal chlorine and acid discharges that caused a fish kill at the Fleischmann’s vinegar factory near Cold Spring Lane.

“And now possibly toxic paint chips are raining down into the community garden, playgrounds, sidewalks, yards and, of course, the Jones Falls.”