After an outcry from residents, state inspectors visited Baltimore’s TV Hill this morning, where they collected paint chips from the area and confirmed the neighborhood’s worst fear – the chips contain lead.

The inspectors “performed testing on the chips using a field device, which detected the presence of lead in the paint,” according to Mark Shaffer, communications director for the Maryland Department of the Environment (MDE).

The samples were taken from the area surrounding the city’s large broadcast towers – one of which, the so-called candelabra tower owned jointly WJZ‐TV, WBAL‐TV and WMAR‐TV – has been undergoing power washing ahead of repainting.

The Nebraska contractor performing the work, Skyline Tower Painting, Inc., was ordered by the city to stop work late yesterday.

• The Brew broke this story yesterday: Residents in Woodberry alarmed after paint flakes from TV tower rain down on yards and streets.

Today, the company has been told to sample the paint chips – as well as the paint still present on the tower – to determine whether it constitutes hazardous waste, Shaffer said.

MDE noted that the company “has vacuumed paint debris from some of the surrounding area, including a daycare center, and is working with the homeowners’ association to remove paint chips from the remaining areas affected.”

They have also been told any material collected must be placed “into a container and closed for proper handling,” including the HEPA filters used inside the vacuums, Shaffer said.

Meanwhile, the apparent radius of the affected area has widened, with residents reporting the red particles and large flakes in an area stretching from Medfield to the Loyola athletic field.

And no response still from Television Tower, Inc., the joint venture comprised of the three television stations that owns the tower.

For Woodberry resident Megan Johnson, today’s news was described as “both validating and heart wrenching.”

It gives residents some hope of holding the contractor and whoever hired them accountable, Johnson said, but it leaves many unanswered questions.

“They’ve been doing this work for weeks,” she said. “How much has it affected our health already? How much has leached into the soil? What about the community garden? Is there anything that can be done to remediate this?”

“How much has it affected our health already? How much has leached into the soil?”  – Woodberry resident.

Other questions are regulatory in nature.

The company should have obtained a permit to do the work, but does not appear to have done so, according to the Department of Housing and Community Development.

“A construction permit should be pulled to remove paint from the tower, and all local, state, and federal regulations related to paint removal should be followed,”  said HCD spokesman Kevin Nash. “We have not located a permit for work at 3723 Malden Avenue.”

The housing department “has general construction safety practices and there are also state and federal regulations on paint removal,” Nash said.

“The proper way to perform the work is to tarp the space so that paint chips don’t spread throughout the community and can be properly removed and disposed of safely,” he continued.

The company should have obtained a permit to do the work, but does not appear to have done so, the city says.

And if water is involved in the removal, disposal must adhere to the Department of Public Works’ requirements governing discharge into the storm water system.

Speaking for the state, Shaffer said MDE is collecting additional information from the company “regarding the scope of work for the project.”

Skyline Tower  Painting Inc. has not responded to a phone message from The Brew. On its website, the company describes itself as providing “professional and communication tower painting” services.

“By keeping our overhead costs low and concentrating our efforts on bringing you high quality paint and efficient painting services from a crew you can trust, we ensure that your tower will be compliant for years to come,” the website says.

“Tower painting ensures compliance with FAA guidelines keeping you from the possibility of incurring huge fines. It also prevents corrosion and rust which will continuously weaken the tower’s structure and integrity.”

A 2020 video by WJZ-TV after unrelated work was performed on the tower. It provide a description of the structure and some history.

Asked if MDE is investigating the radius of the paint flake dispersal, Shaffer said characterizing that is part of the “formal report” the agency is putting together.

Residents and others say they already know the affected area extends well beyond TV Hill.

The paint flakes have been reported north, east and southwest of the tower.

Locations include Loyola University’s athletic field near Cold Spring Lane and the Giant Food parking lot in Hampden, according to Councilman James Torrence, whose 7th District includes Woodberry where the TV tower is located.

The bright red flakes also have been found in Medfield and Park Circle, Torrence said, noting that some of the areas of concern include the 6th district turf of his Council colleague, Sharon Green Middleton. 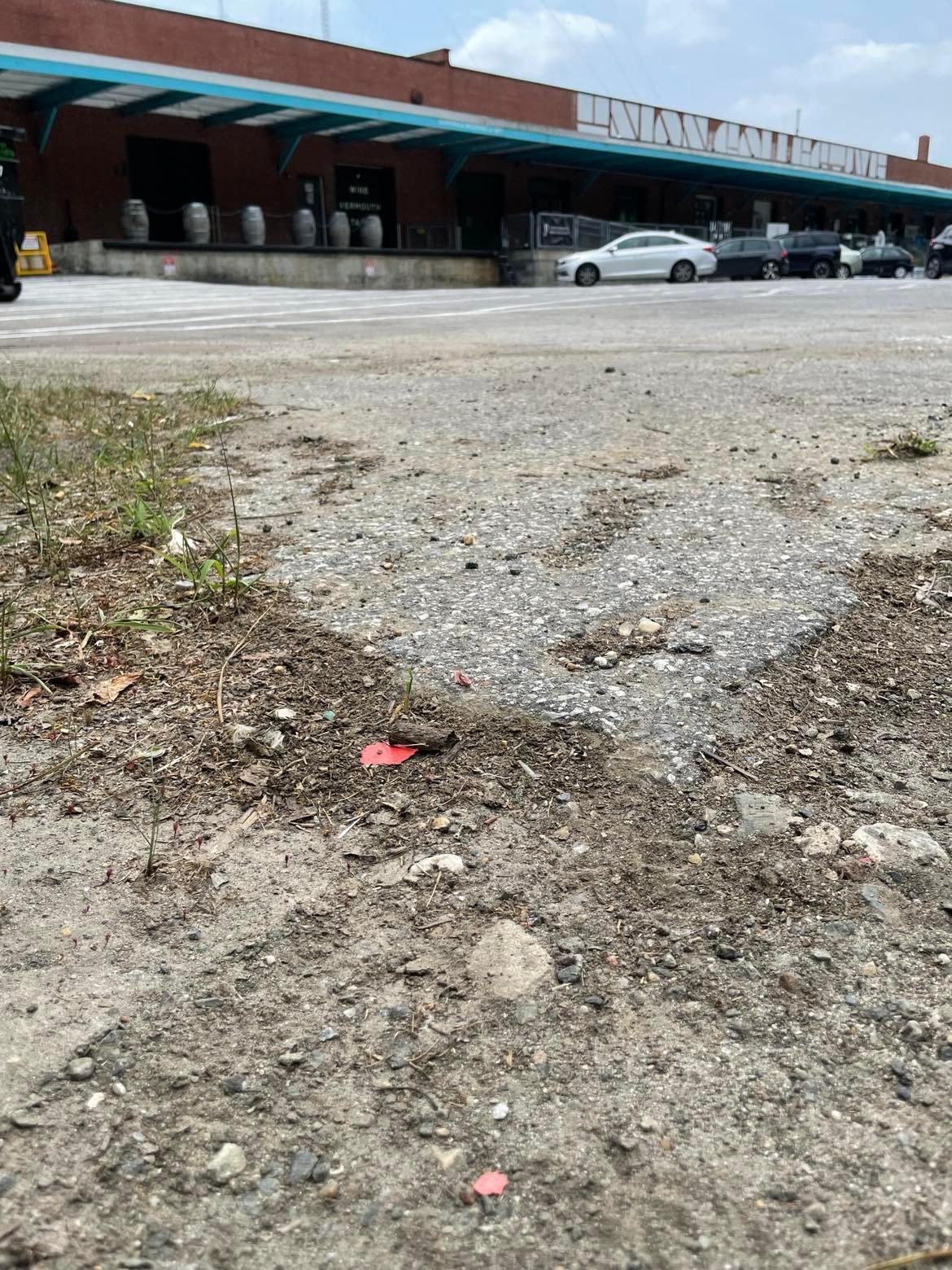 At the Union Collective in Hampden, The Brew today found several bits of red material that look similar to the ones causing alarm on TV Hill.

Red on one side and white on the other, the apparent paint flakes were in the dirt on either side of the parking lot, located at 1700 West 41st Street.

They looked much like the material found by residents in the yards, sidewalks and playgrounds around TV Hill.