A measure that takes oversight of Baltimore’s Inspector General away from elected officials and gives more control to the City Council comes before the Council today with a deadline looming:

The bill would have to receive both preliminary and final approval at tonight’s meeting in order to go before voters in the November general election in the form of a charter amendment.

Resolution 22-0238, introduced by Councilwoman Odette Ramos, establishes a new way to choose members of the advisory board that oversees the work of the Office of the Inspector General, Baltimore’s watchdog for government waste, fraud and abuse.

The board currently is composed of elected officials or their designees, plus the city solicitor and two law school deans.

Since the measure was introduced in May, amendments have tweaked Ramos proposed method of re-configuring the board.

Under the bill, recently amended and approved by the Rules and Oversight Committee, the 11-member board would consist of:

• A group of seven people from the community drawn at random from names submitted by the 14 City Council members.

• One person chosen by the Maryland Chapter of the Association of Certified Fraud Examiners.

• One person chosen by the Maryland Association of Certified Public Accountants.

• The dean of the University of Maryland Law School or a designee.

• The dean of the University of Baltimore School of Law or a designee.

“There would be no elected officials, no employees of the city, as well as anybody doing business with the city that would be allowed on the board,” she said.

UPDATE: The bill was approved tonight by a vote of 12-1, with Council members Ramos and Antonio Glover absent. (Ramos said earlier in the day she would not be attending the in-person meeting at City Hall because she has tested positive for Covid).

Councilman Ryan Dorsey voted against the bill, saying an 11-member advisory panel would potentially be “unwieldy.”

Dorsey, who introduced the voter-approved 2018 measure that separated the inspector general from the mayor’s office and established the requirement for the advisory panel, also said it was premature to change the structure of the advisory panel.

“The advisory board has met exactly once,” he noted.

Dorsey also said he was concerned  the bill could be illegal, observing that the city “may not have the authority to name ex-officio members from outside city government to serve on the board.”

“The public should never wonder if a report is biased or is fully accurate because the subject of an investigation sits on or is influenced by a member of this board,” she said, addressing the advisory board last August.

“No citizen of Baltimore should be concerned whether a future inspector general has the fortitude to stand up to, or investigate, their own board,” she added. 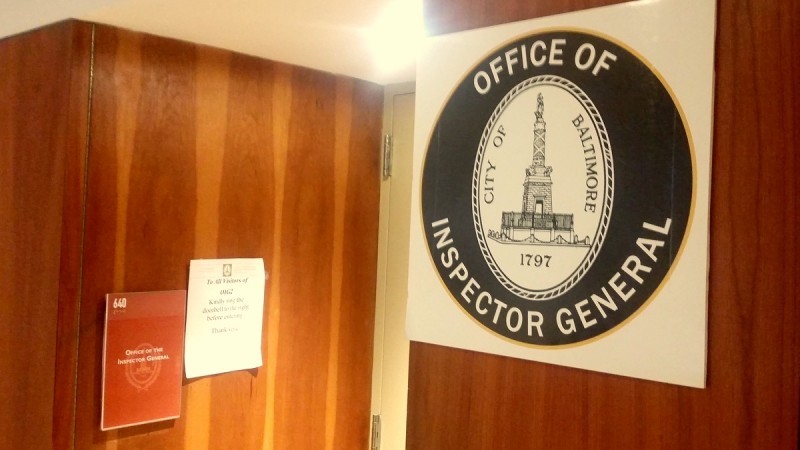 Entrance to the OIG Office in City Hall. (Mark Reutter)