The bill had drawn sharp criticism from environmental groups, including the Chesapeake Bay Foundation, and a harsh assessment from  Maryland Assistant Attorney Genera Kathryn Rowe, who said that it “violates state law.”

Bevins said today that she made the decision after meeting with staff for Baltimore County Executive Johnny Olszewski and the Department of Environmental Protection and Sustainability.

“In those discussions it has become clear to me that there is a path forward, but that Bill 57-22 may have been a step too aggressive,” Bevins said in the one-page release. 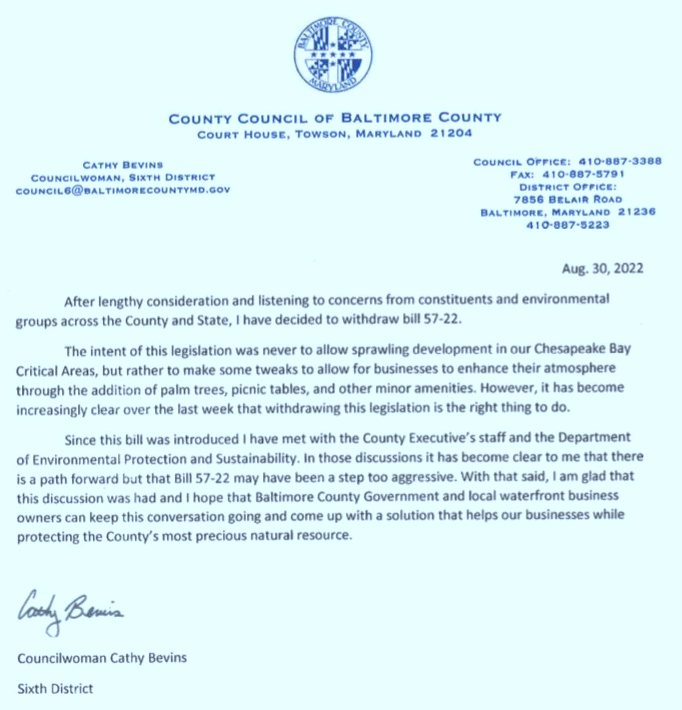 Olszewski’s office also offered remarks on the withdrawal of the bill, which had been scheduled for discussion at a Council work session today.

“Baltimore County remains committed to doing more for our waterfront businesses, but doing so in a way that upholds Maryland’s important critical area protection laws,” spokeswoman Erica Palmisano said in an email to The Brew.

“We appreciate Councilwoman Bevins withdraw of Bill 57-22, and we look forward to working with the Council and community members to explore ways to support our businesses while also protecting environmentally sensitive areas.”

Despite the fact that Bevins’ statement had been circulating on social media for hours, the 4 p.m. Council work session went ahead with consideration of Bill 57-22.

But not before allowing testimony from the witnesses who had continued to wait online for the chance to speak at the virtual meeting.

One of them was bill supporter Brian J. Hall, a marina owner who said the bill was “overzealous” and would hurt small businesses.

Another was Middle River resident Lindsey Crone, who called the bill “yet another example of the death-by-1,000-cuts approach to eroding the health of our Bay.”

“It comes just one week after storm water runoff drove so much sediment into the Gunpowder River that it still hasn’t recovered, killing all commercial and recreational crabbing activity in the area and raising bacteria levels 1,000 times above normal and 10 times above safe levels,” Crone said.

“This should be a wake-up call to all state and county officials that current mitigation policies are failing the Bay,” she warned.