Speaking before a City Council that was poised to beef up the terms of its own pensions, Councilman Zeke Cohen reminded them of earlier votes by the body to cut back pensions for police officers, firefighters and non-elected city workers.

Cohen was speaking last night against a bill introduced by Council President Nick Mosby that would reduce from 12 to 8 the number of years required for Council members and other elected officials to earn a pension.

The bill (which went on to pass by a narrow margin) “sends the wrong message” at a time when residents are worried about inflation and a possible recession, he said.

“I would note that in 2010,” Cohen said, “the City Council voted to increase the amount of time police and firefighters have to serve in order to get their pension from 20 to 25 years.

He then also noted “that in 2014, the City Council reduced the benefits that non-elected government employees in Baltimore receive in their pension.”

The Council President fired back, chiding his First District colleague this way:

“Your words matter and facts matter, particularly as public servants, so I want to be really clear.”

Mosby went on to say what he thought Cohen got wrong.

“The City Council did not vote. That was a negotiation between the union and the administration at the time, which was under [Mayor] Stephanie Rawlngs-Blake.”

Mosby concluded his remarks by again admonishing Cohen for inaccuracy:

“It’s importantly. . . that we communicate our facts to our constituents and not necessarily use the talking points that we hear on Twitter,” he said.

After the bill was approved (with Cohen among the five members voting “no”), the councilman went back and fact-checked Mosby’s assertions. He announced his findings today on Twitter.

“As the President stated, facts matter. He got his wrong,” said Cohen, posting screenshots of Council records.

Cohen: “Get your facts right”

Both of the changes that impacted municipal pensions – in 2010 and 2014 – were enacted after a Council vote:

• The measure increasing the vesting period for police and firefighters (bill 10-0519) was approved on June 21, 2010, according to the Council’s legislative look-up site.

• The measure reducing the pension benefits that non-elected employees receive (bill 13-0247) was approved on May 5, 2014. It was by a unanimous vote, including by then 7th District Councilman Nick Mosby.

News stories recapped the lead up to the measures – the impact of the Great Recession on the city’s finances, a recommendation by the Greater Baltimore Committee, negotiations between Rawlings-Blake and the unions.

But the final actions were taken by the Council.

Asked for comment today on the back-and-forth, Cohen pointed to his posted documents and kept it brief:

“None of us are perfect. But if you are going to call me out during a debate, at least get your facts right.” 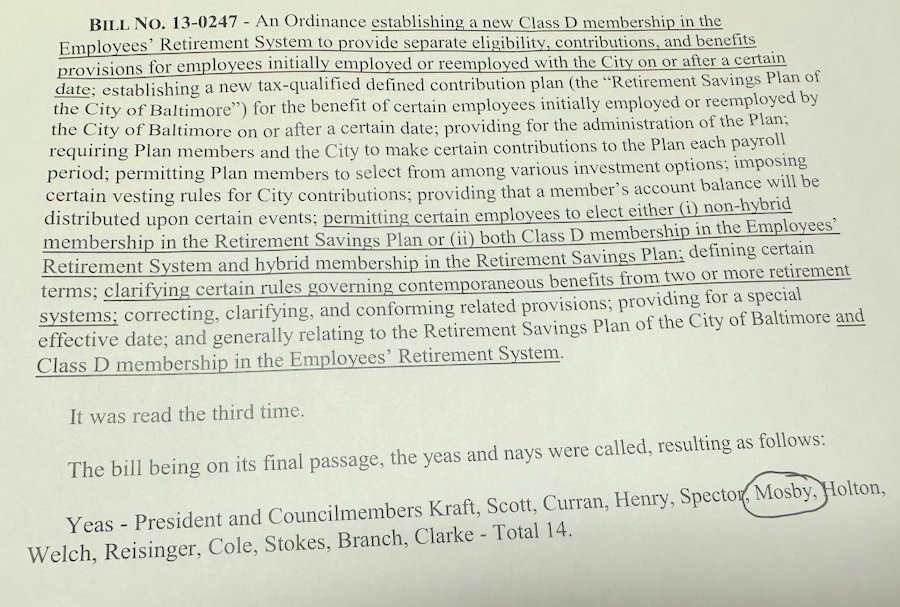 The bill to reduce pension benefits for non-elected city employees was approved unanimously for final passage on May 5, 2014. (baltimorecitycouncil.com)