In an unprecedented move, the Baltimore City Board of Ethics is calling on Mayor Brandon Scott to delay signing a controversial pension bill that was approved by the City Council last week.

In a letter to the mayor released this morning, the board says the bill appears to violate two provisions of the City Ethics Code:

• “Prohibited participation” by public servants in matters that “might reasonably be expected to” personally benefit them (Article 8, Section 6-6).

• “Prohibited employment” in which public servants are “employed by or have a financial interest in any person that is subject to the authority of that public servant” (Article 8, Section 6-11).

“Bill 22-0292 intends to change city policy so that current and future Council members and elected officials would obtain a considerable financial benefit to which they are presently not otherwise entitled,” the letter says.

“Importantly,” the letter continues, “the bill benefits current Council members and elected officials, not members of the general public. The intent of the Ethics Law is not only to preclude the use of government to advance personal and/or private financial and economic interests, but also to preclude the appearance of the use of government in furtherance of such interests.” (Italics in the letter.)

The measure will allow the 14 members of the City Council – plus the Council President, Comptroller and Mayor – to become eligible for full pensions after serving for just eight years, down from the current 12 years.

“The Board believes that certain provisions of Bill 02-0292 do not appear to be impartial or a product of independent judgment, and that the appearance of or lack of impartiality could undermine – and may have already undermined – public confidence in the execution of city governance.” 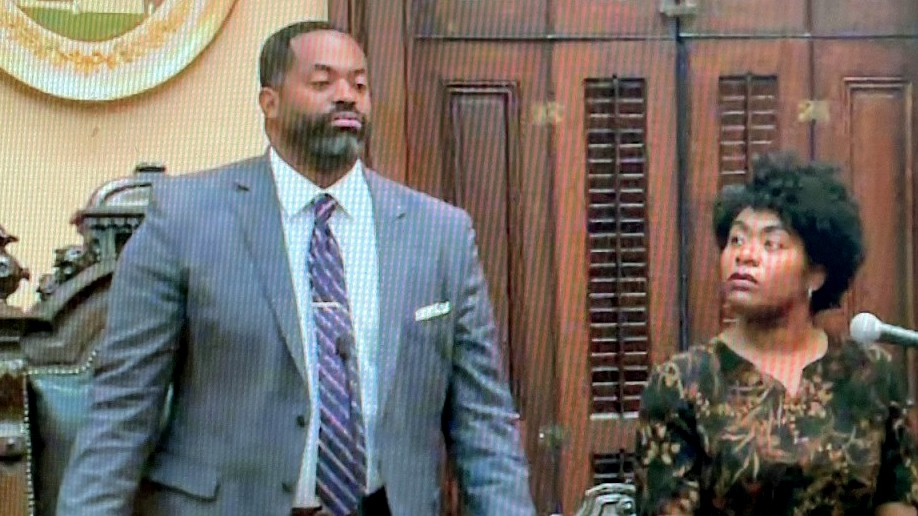 The bill was fast-tracked by Council President Nick Mosby, who claimed a shortened vesting period for elected officials was necessary after Baltimore voters approved Question K earlier this month, which limits elected city officials to two four-year terms in the same office.

Noting that his office “was not asked to weigh in” on the bill, Ethics Board Chair Stephan Fogleman told Scott that the board “believes that, as written, the bill is inconsistent with the intent of the Baltimore City Code” by shortening the vesting period “for the grandfathered Council members from 12 to 8 years.”

The Council approved the bill last Monday night by a vote of 8 to 5, with two abstentions. Fogleman asks the mayor to delay implementation of the bill “until such time as the Ethics Board is able to provide an advisory opinion.”

Increased pressure on Scott not to sign the bill.

The letter increases pressure on Scott not to sign the bill.

The mayor has not taken a public stand on the measure. So far today, his office has not issued a statement or responded to questions from The Brew about his intentions.

The ethics board consists of five members who are appointed by the mayor, with one member nominated by the City Council President and another by the City Comptroller. Currently, one of the seats is vacant.

Two years ago, the board’s administrative functions were taken over by the Office of the Inspector General, which has led to increased activity by the board, including its current court battle with Mosby over the establishment of a secretive legal defense fund for himself and his wife, indicted Baltimore State’s Attorney Marilyn Mosby.

Last week, former Mayor Sheila Dixon popped into the picture and spoke out against the bill.

She noted that voters had approved a charter amendment in 2006 that took salary and benefits proposals for elected officials away from the City Council and placed them in the hands of a compensation committee.

Referring to Mosby, Dixon told Fox45 News, “Someone in finance and retirement should have, when the bill was introduced – and I don’t know whether or not that happened – should’ve shared with him that this commission is in place.

“President Mosby,” she continued, “he just seemed adamant on getting this passed, and that raises some questions when you have this commission.”

One of the strongest critics of the bill, First District Councilman Zeke Cohen, launched a new attack on Mosby in the wake of the Ethics Board letter.

Tweeting this afternoon that “President Mosby’s bill creates a clear conflict of interest,” Cohen asserted that “the Council President has further eroded public trust with his rushed, ethically questionable bill.” 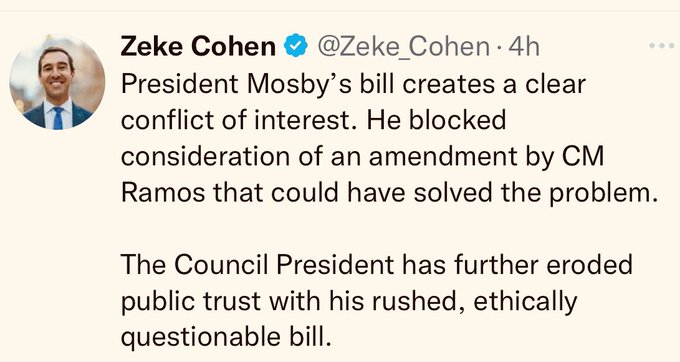